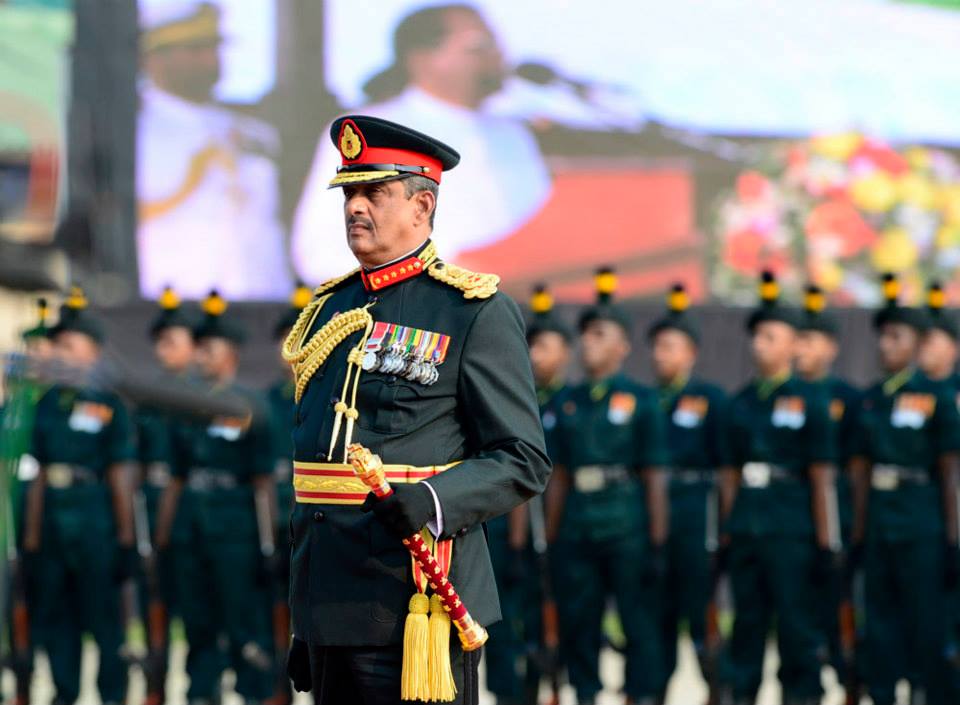 The Government of Sri Lanka awarded the Field Marshal title to former Army Commander General Sarath Fonseka for the yeoman service rendered by him, achieving the victory over terrorism. The official awarding of this honorary title to General Sarath Fonseka by President Maithripala Sirisena was taken place at the Ministry of Defence.

The title Field Marshal is an honorary and respected title bestowed by the Army. Only a handful has been given this title in the world. General Sarath Fonseka is the first Sri Lankan to be bestowed his Field Marshal honorary title in Sri Lanka’s history. A person who has been honoured with the Field Marshal title is considered an infinite hero. 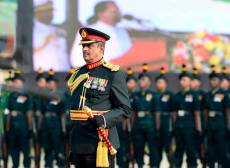 He was admitted to Ampara Madawalalanda Maha Vidyalaya in 1955 and Hiniduma Thawalama Vidyalaya for basic education and after a lapse of two years, he entered Ambalangoda Dharmashoka Vidyalaya in 1958 where he studied until the year 1965. Afterwards, he received admission to Colombo Ananda College where he emerged as a prominent student, not only in education but also in the field of athletics and sports. He brought fame to his college as a skilled swimmer and a shining water polo sportsman. He also was the Sergeant in the cadet platoon at Ananda College.

Upon completion of his schooling, he enlisted to the Sri Lanka Army on 5 February 1970 as a Cadet Officer, thus laying the foundation stone for his rise to be the first ever Field Marshal in the history of the Democratic Socialist Republic of Sri Lanka.

Having entered the Sri Lanka Military Academy, Diyatalawa as a Cadet Officer, he was successfully commissioned as a 2nd Lieutenant in 1 Sri Lanka Sinha Regiment (1 SLSR) on 1 June 1971.

From there onwards, 2nd Lieutenant Sarath Fonseka in his unit as a platoon commander effectively served in various areas of the island, displaying the prospects of becoming a full-pledged officer in the future, to be in keeping with the popular Sinhala adage, ‘Hedena Gaha Depeththen Dene’ (Budding petals of the sapling assure its healthy growth) and won commendation for his committed services from his superiors.

After receipt of promotion as Lieutenant on 5 February 1973, he left for India to follow Commando Course in May, the same year. Lieutenant Sarath Fonseka after his return to Sri Lanka, continued with his duties and received the promotion to the rank of Captain in 1976, through his untiring dedication and commitment to the service. Captain Sarath Fonseka in 1978 and 1979 further expanding his military horizons, followed the Anti Terrorist Jungle Warfare Course and the Support Arm and Weapon Course in India on two separate occasions. After his successful completion of those training projects, he again left for Pakistan in 1981 to attend the Platoon Commanders Course as a Major. He was promoted to the rank of Major in 1980.

During his tenure in 1 Battalion Sri Lanka Sinha Regiment (1 SLSR), he had the privilege of serving as an Instructor at the Sri Lanka Military Academy, Ampara Combat Training School and Infantry Training Centre, and later as the Chief Instructor, Deputy Commandant in the same training institutes. Major Sarath Fonseka after successful completion of the Defence Services Command and Staff Course in Bangladesh in 1987, returned home to take over duties as Commanding Officer, 4 Sri Lanka Light Infantry.

Elevated to the rank of Lieutenant Colonel on 15 October 1988, he was appointed the Commanding Officer for 1 Battalion Sri Lanka Sinha Regiment on 6 May 1989 at Ambepussa SLSR Headquarters.

The Army Headquarters, considering political unrest that prevailed at that time in the country, appointed Colonel Sarath Fonseka to be the Coordinating Officer for Gampaha District, in which he performed a noteworthy role, using his warfare, professional and educational experience for the sake of the country. Likewise, the contribution he unfailingly made towards the ‘Balawegaya’ operation, launched against LTTE terrorists, went on record as one of the most distinguished and exceptional one in his capacity as a Brigade Commander.

Promoted to the rank of Colonel on 1 April 1991, Colonel Sarath Fonseka did a stint as the Center Commandant, Sri Lanka Sinha Regiment at Ambepussa beginning 7 November 1991 again after a respite from his operational ground duties. Thereafter, Colonel Sarath Fonseka served as Staff Officer I at the Directorate of Operations at the Army Headquarters.

With the gradual escalation of the terrorist menace, he who had been by then recognized as a fierce warrior, was again summoned for ground operational duties and subsequently deployed as the General Officer Commanding of the 23 Division. In the meantime, Colonel Sarath Fonseka sustained injuries in a terrorist attack, forcing him to be away from the battlefield, which was regarded as an irreparable loss at that point of time to the battlefield. However, his speedy recovery after a short while enabled him to rejoin the operations after some time.

On 23 February 1998, he received his promotion to the rank of Major General and on 2 September, the same year, he became the Colonel of the Regiment, Sri Lanka Sinha Regiment. During that interim period, he was also appointed the General Officer Commanding, 22 Division and Director General General Staff at the Army Headquarters, one of the most senior appointments in the Army.

The onset of the year 2000 commenced with severe escalation of fighting between the Sri Lanka Army and LTTE terrorists. Meanwhile, terrorists, preparing initial ground work had launched attempts through their ‘unwavering waves’ operation to capture the Jaffna peninsula. This well-organized terrorist move was challenged and defused by indispensable officer of the Army, Major General Sarath Fonseka as Commander, Security Force Headquarters – Jaffna, forcing the terrorists to flee from the area, unable to face the stiff resistance of the effective strategies of the Army.

After those triumphant operations, Major General Sarath Fonseka was posted to fill the vacancy at the Security Force Headquarters – Wanni as its Commander.

While serving the Security Force Headquarters – Wanni, he proceeded to follow the Royal College of Defence Studies (rcds) course and returned afterwards to the island to assume office as Commandant, Defence Service Command and Staff College at Sapugaskanda on 5 February 2002 and concurrently as the Colonel of the Regiment, Sri Lanka Sinha Regiment once again.

During 2003 – 2004, Major General Sarath Fonseka served as Commandant, Sri Lanka Army Volunteer Force Headquarters and was later on appointed as Director Infantry, Deputy Chief of Staff and Chief of Staff respectively as his military career matured.

After his appointment as 18th Commander of the Sri Lanka Army in the Democratic Socialist Republic of Sri Lanka on 6 December 2005, he was elevated to the rank of Lieutenant General, clearing the way for him to totally take control of ongoing ground operations and the challenge of wiping out terrorism from the motherland.

Shouldering the arduous and most formidable task and responsibilities of freeing the country, to which was born, from terrorist grips, onto himself upon his assumption of office as the Commander of the Army, he meticulously devised necessary ground plans for necessary military offensives and operations. The attempted suicide LTTE attack on his life inside the Army Headquarters on 25 April 2006, brought about a turning point in his own life and the subsequent conduct of the warfare against the foe, although he sustained critical injuries as a result of the terrorist blast at the Army Headquarters.

The merits he had acquired and blessings the country has had invoked on him miraculously spared his life after treatment he received in several countries which was indeed regarded a resurrection from the dead. He was thus twice blessed to have been able to rejoin anti terrorism operations after his recovery and return to the battlefield.

With the abrupt closure of the Mavilaru sluice gates by terrorists, the then existent cease-fire agreement, turned null and void and that saw the birth of the first Lieutenant General Sarath Fonseka – commanded humanitarian operation that provided relief to the beleaguered poor people in the region after re-opening the sluice gates for vital water. His undisputed and unparalleled command and guidance enabled troops to march forward afterwards capturing LTTE-held Sampoor, Vakarai, Thoppigala and the whole of eastern region respectively.

At the end of ground operations in the east, his command spread to areas, like Mannar, Silawathura and the Wanni region. It afterwards directed towards the Nandikandal lagoon.

Finally, over two and half year-long Wanni humanitarian operations, resulted in the elimination of the ruthless LTTE terrorist leader who reigned supreme on 19 May 2009 in Nandikandal.

He emerged an icon in the 30-year long fighting history against the island’s LTTE terrorism, particularly because Lieutenant General Sarath Fonseka, managed to succeeded in total elimination of violence within a span of less than three years upon his assumption of the reigns as the Commander of the Army in Sri Lanka’s contemporary history.

Recognizing this unmatched victory over terrorism, he was subsequently promoted to the four star General and afterwards he was elevated to the office of Chief of Defence Staff on 15 July 2009. After his illustrious and unmatched 39 years of military career, this fearless War Hero par excellence, retired from the service on 14 November 2009.

General Fonseka was awarded the highest gallantry medals, Rana Wickrama Padakkama (RWP) and Rana Sura Padakkama (RSP) in recognition of his selfless and unparalleled heroism, bravery and commitment in the fight against terrorism. Deshaputhra medal has also been conferred on him following injuries he sustained during military operations.

This site uses Akismet to reduce spam. Learn how your comment data is processed.